“Service to others is the rent you pay for your room here on earth.”

In 2007 I had been going through life engaged in small but meaningful acts of service such as volunteering at the food pantry at my church when God forcefully put it on my heart to start stretching in service. Specifically I felt led to go on an international mission trip. I wasn’t sure how I felt about this since I had never been on any kind of mission trip before but I wanted to be obedient so I began going to interest meetings for various trips through my church, McLean Bible Church.

After attending several without finding a fit I went to one where the team would be going to Zambia, which is in sub Saharan Africa and where we would be ministering primarily to children who had been orphaned by AIDS. This certainly appeared to constitute stretching and I knew this was where I was to go. As soon as I applied He started going to work. I had the honor of meeting with President Bush as a representative of our team prior to departing and I have made lifelong relationships with many of my team members. One of the best parts was that the experiences of this trip formed the foundation of my ministry efforts from that day forward.

First of all I fell in love with the people of Africa. Having subsequently been to many other parts of the world I find my heart is still there.

Second I had a formative experience at one of the villages that I now realize served as the genesis of my calling to The Last Well ministry. We went to a remote village where we spent the day planting crops in the village garden. The water for the garden and for the entire community came from a simple hand pump well that had been drilled for them about 2 years prior. I spoke with the village pastor and kind of the honorary leader and asked him about their plans. Well, he grabbed a hold of my arm and didn’t let go for about half an hour.

He explained that before the well they were eking out an existence and had many health problems and lack of food but after the well came in they were able to grow enough crops to feed themselves. The next year they planted more and were able to grow enough to sell some and buy some books for the school. This year he explained that they were growing even more and could sell enough to buy many more things the village needed. He then laid out the expansion plans for the garden and all the things they could do in the next couple years. He was so excited and had this great vision. I saw firsthand how just a simple water well could take an entire village of hundreds of people from bare subsistence to relative abundance in just a few short years.

Then in 2008 The Last Well ministry was formed and founded by my pastor and friend Todd Phillips. Many of the initial participants were good friends of mine as well. So with the combination of the people of Africa, close friends and the opportunity to provide not only clean water to the people of Liberia but the Living Water that comes from saving faith in Jesus Christ my path was set.

Not all my callings have been in Liberia. I have since found numerous other local causes to apply my efforts to when I’m not off gallivanting around Africa.  Some of my favorites are Children’s Miracle Network (www.cmn.org) and the Whole Hearted Foundation (www.wholeheartedfoundation.org) 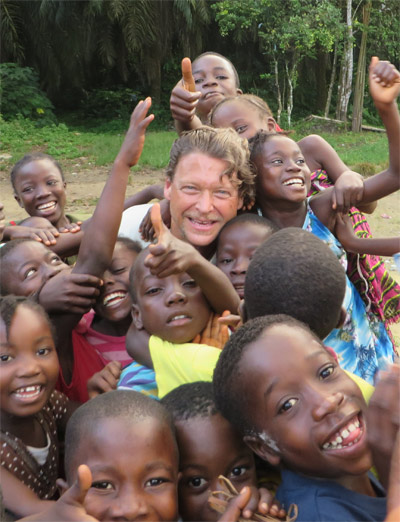